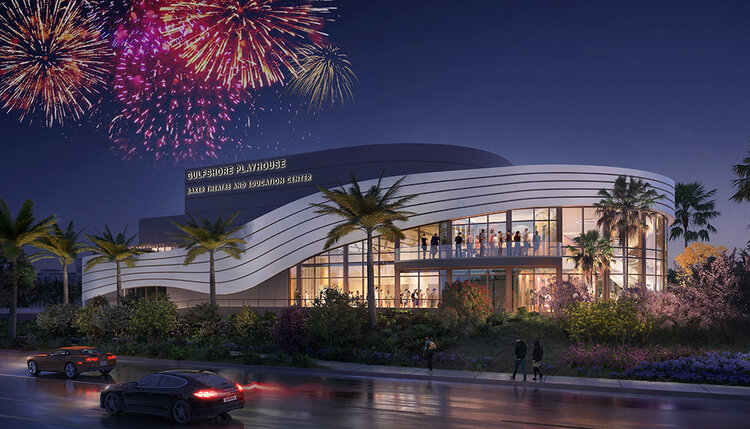 Gulfshore Playhouse is Naples’s professional theatre company, founded to fill a niche in a community which holds great interest in the arts. The professional self-producing theatre has mounted Broadway quality shows in Naples for nearly two decades. After years of building a following, it has outgrown its current facility. The theatre company and donors conducted a competition to create a new home naming H3 and Arquitectonica the winning architects, working in partnership to create the design of the new facility and educational center.

The 50,000 square foot complex will feature a 350-seat stage house, a 125-seat black-box studio, an educational wing, art gallery, public café, a Founders Lounge, rehearsal spaces, costume shop, storage, administrative offices and separate parking facility. The distinct, sculpted architecture reflects the innovative spirit of the performance art work taking place within while carefully selected exterior materials respond to the local climate. Conveying a sense of the surrounding context, following the movements of sand, sun, and sea, the project expects to stand as a beacon and attraction for the Southwest Florida region. The newly selected site leaves room for a new 115,000-square-foot parking garage to be constructed. The landscape design will also play an important role to create more public space and connections to the area’s greenway along Goodlette Frank Road. 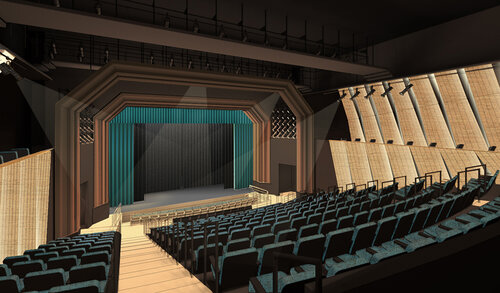 The Coconut Grove Playhouse opened in 1927, originally as a movie theater, operated by Paramount Enterprises and in 1950, was converted to a venue for live performances. Built in the Mediterranean Revival style, the Playhouse was designated as a historic site in 2004 as it embodies an architectural style reflective of south Florida.

The project’s initial phase involved the forensic analysis of the existing historical structure; master planning the site to accommodate a new 300-seat theater, a 600-seat theater and a parking garage with retail space; and design for new back of house spaces that support modern day performances. After careful consideration, the scope was reduced and the 600-seat theater eliminated.

The new 300 seat theater will be a state of the art production house with full fly tower. Significant historic artifacts, such as the original proscenium arch, have been incorporated into the design while technology and lighting systems have been provided that will enhance production value.

As an extension of a new residential development in Fort Lee, the Fort Lee Mayor and City Council included in the developer’s agreement a structure to house a one-screen, 250-seat multi-purpose theater as well as a film exhibition center. The facility will be operated for the borough by the Fort Lee Film Commission, and aptly named the Barrymore Film Center.

Expecting completion by late 2021, the Center is located near the New Jersey palisades and George Washington Bridge, originally known as the birthplace for American film. Many of the most popular early films were shot blocks away from the future location of the venue on Main Street, where the term “cliffhanger” originated. At the turn of the 20th century, the area enabled advancements in technology and provided women working in the motion picture industry with opportunities.

The theater is sited alongside a 1,950-sq-ft exhibition hall which will showcase the Commission’s extraordinary collection of film and film-related artifacts from the era. The facility is expected to provide a home for annual film festivals, retrospectives, the screening of new independent films, as well as live stage programs working in partnership with the Museum of Moving Image and NYU Costume Studies Program.

The facility also incorporates all the necessities required of a theater house: dressing rooms, scene and prop shop, storage spaces, box office, and an entry lobby with concessions area and gift shop, and within 21,000 sq ft. 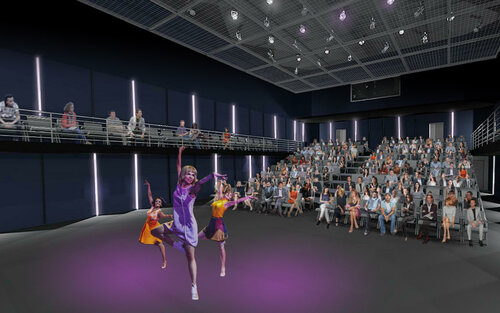 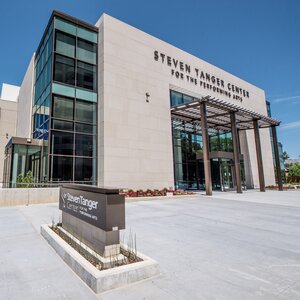 In the fall of 2012, H3 was hired by the City of Greensboro and the Community Foundation of Greater Greensboro to provide public outreach, programming, and concept design for a new touring roadhouse in downtown Greensboro.

H3 addressed the City’s four goals for the project: to accommodate optimal activity programming in the new performing art center, choose an optimal location, stay within a $60 million budget, and generate community support.

H3 conducted feasibility studies for four sites identified by the City, testing the ability of each to accommodate the functional requirements of a major performing arts venue. Each proposal was qualitatively and quantitatively analyzed using a balanced scorecard approach.

H3’s concept design for a 3,000 seat, 65,000 square foot fully flexible arts center was successfully approved by the city. The design presents a creative multi-purpose venue to meet the needs of the 21st Century. It is both multi-functional and flexible in successfully accommodating a wide range of uses.

H3 provided the city Greensboro to support fundraising efforts and move forward with the project. The performing arts venue is scheduled for a November 2021 opening. 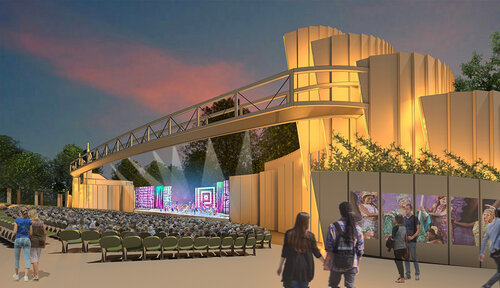 The Muny is a large, open-air amphitheater located in the heart of St. Louis. With an 11,000-seat capacity, it stands as the largest outdoor theatre in the US enduring a 100-year history from its humble beginnings as a grassy plane situated between two oak trees.

To build on this history and support an increased range of productions and shows, The Muny commissioned H3 to help with the venue’s renewal. The reconstruction includes designing a new stage, renovating front row seating for improved sitelines, and creating new back-of-house and storage spaces within structures flanking either side of the stage newly constructed to four stories in height. Supporting a green room, sound room, and storage for lighting, props, and mechanicals, the glass fiber-reinforced concrete shell-like paneling covering the structures creates a surface for the play of light shows. Changes also include resolving the existing orchestra pit, originally exposed to the outdoor elements and repositioned under the stage. 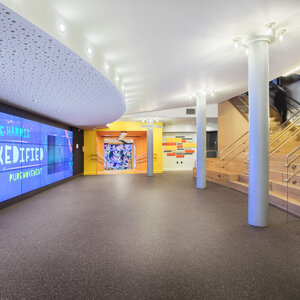 Since first opening its doors in 1995, The New Victory Theater has come to represent more than just a child’s first experience with theater. It is both the oldest operating theater in New York City and the only theater dedicated to its youngest theatergoers. It is an important cultural institution in New York City having served as a catalyst for the rebirth and transformation of 42nd Street. Over the course of the last 20 years, The New Victory Theater has evolved from a radical, unproven, optimistic idea into a leading cultural institution, redefining our very notion of children’s theater and entertainment.

The current renovation serves to re-imagine The New Victory Theater public spaces to better engage audiences and build on the organization’s mission. The public spaces include a street level ticket lobby, orchestra lobby, upper mezzanine lobby and two lower lobbies. Together, these spaces serve all functions related to public accommodations such as ticketing, restrooms, concessions, retail and public programming. The pre-show, intermission, and post-show user activities and programs were developed with the integration of new technology and a design aesthetic to enhance the audience experience. Major components included creating a new identity through signage, integrated audio-visual walls, retail millwork, concessions and pantry facilities, and a new amoeba-shaped lobby space on the lower level for teaching artists and education programs.

The new lobby design welcomes visitors to participate in hands-on explorations of shows’ themes and art forms, imbuing the theater’s programming philosophy to break down barriers, foster creativity across economic lines, and deepen the relationship with the arts. The spaces were unaccommodating to growing the organization’s mission, intended to serve the public with educational opportunities and creating children-friendly areas that are compliant with accessibility requirements – a challenge with a multi-level space.

Developing the connections between the levels became major components to address in the renovation. The team worked to unify the spaces with cohesive materials and a brightly hued, color palette to reflect light and impart a playful ambiance. Visitors immediately have an impression before the theater experience, upon entering the street-level lobby and the upper level mezzanine.

The David H. Koch Theater has been the home of the New York City Ballet since its opening in 1964 and following, home of the New York City Opera from 1964 to 2011. Originally, called the New York State Theater, it was designed by Philip Johnson and John Burgee whose firm, JCJ, continued to provide updates and technical refurbishments to the theater throughout the 1980’s. This included adding additional aisles to the orchestra level seating plan, a new seat installation, stage rigging, and changes to the orchestra pit.

The Patron’s Lounge was updated, a space reserved for the New York City Ballet’s major donors and high-level subscribers was updated, creating a new pantry and toilet facilities, with elegant new finishes, furniture, and lighting. Hugh Hardy selected wallpaper, hand-painted, and patterned, keeping to the lounge’s original design. The rehearsal rooms were renewed with modern dance floors, lighting, and acoustics. A retractable seating system provides adaptability for small scale reviews and seating for parents while their children perform in the yearly presentation of the Nutcracker. Updates to the costume storage rooms, the physical therapy suits, and the dancer’s exercise room rounded out the scope of work. While the goal for the renovations was to provide more user-friendly public spaces and improved work facilities for the staff, alterations were also completed so that the public would perceive little occurrence of intervention. 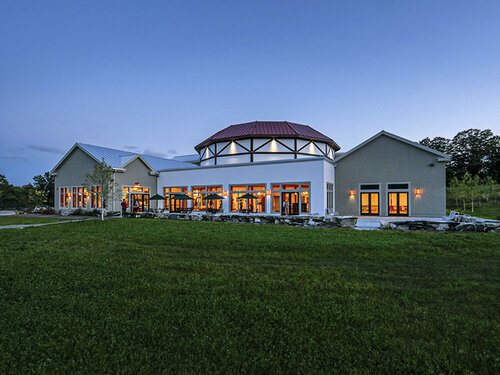 The Greensboro Arts Alliance and Residency (GAAR) is a community-based organization that provides cultural, economic, and artistic opportunities for the residents of the northeast Kingdom. Since 2005, they have staged performances as tent shows. Due to the limitations of producing shows outside, performances are only held during the months of July and August. GAAR desired a performing arts complex that could serve the community year-round.

GAAR retained the services of H3 to design a new state-of-the-art facility. The building is intended to be a cultural connector between Greensboro and the rest of the community and accommodates use as a community space by other organizations.

Inspired by Elizabethan theaters, the design of the theater ensures that the building does not intrude on the local environment. The performing arts complex includes a 300-seat theater, support areas, and a cafe. 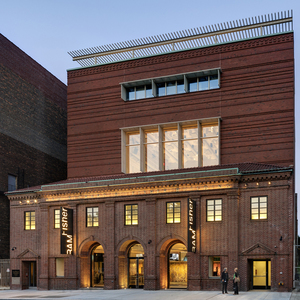 To create the new Richard B. Fisher Building, H3 worked with the Brooklyn Academy of Music to transform a historic 1928 building into a new home for emerging artists and community groups, innovative arts education programs, and intimate performances. The renovation of the two-story historic building and the six-story addition reflect the project’s location in the BAM Historic District. The addition’s façade provides a subtle, textural counterpoint that lets the historic Salvation Army building take center stage. During the day, the building provides continuity with the adjacent historic façades of the BAM Opera and Williamsburg Savings Bank Tower; at night, it glows as a beacon on the block, with light and activity.

The project adds the 250-seat Fishman Space and the 100-seat Hillman Studio to the portfolio of venues at BAM, providing much needed smaller size spaces to accommodate experimental, international, and community events and rehearsals. The compact design also integrates a flexible two-level lobby space with bar/concession stand, classroom, offices, support spaces, and a landscaped roof terrace.