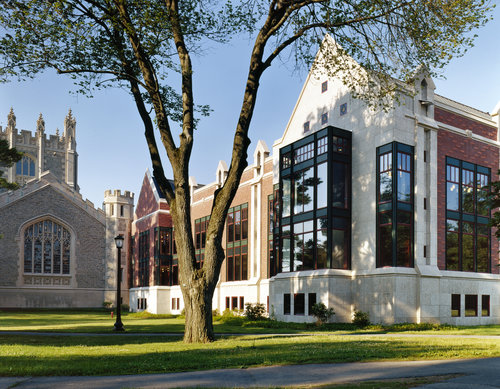 H3’s team master planned and implemented a major renovation and expansion of Vassar College Libraries. Since opening in 1905, the College’s English-style Thompson Library had been joined by several additions including the 1937 Van Ingen and the 1976 Lockwood. Incremental expansion accommodated growth, but sacrificed clear circulation. We prepared a master plan to allow the library, which serves a student population of 2,250, to function better as a single, cohesive facility, while adding a 30,000 square foot addition.

The master plan reorganizes and expands facilities while integrating digital technology. The renovation and expansion adds clarity of organization and space and offers areas for socializing and interaction.

On this campus, renowned for its beauty and the variety of architectural styles of its 100 buildings, the renovated and expanded Vassar College Libraries are better able to serve as the cohesive nucleus of campus academic life.